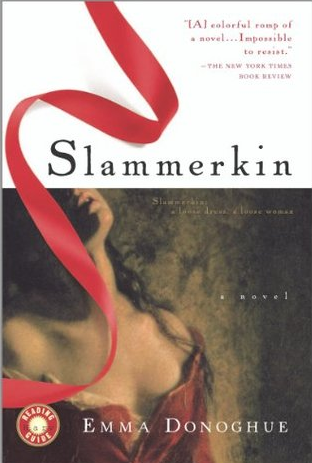 Slammerkin tells the story of teenaged Mary Saunders in 18th century London, who resorts to a life of selling her body in an effort to move past her working class, poverty stricken upbringing. The first thing I want to say is that Emma Donoghue is such a talented writer. I hadn’t read anything by her beforehand, but most will know her from Room. Donoghue excels in explaining details in unique, particular, and beautiful ways. I didn’t find any of the same old tired turning of phrases or plot points in this book. I had an idea of what Slammerkin would be about, and then it took me to a place I actually did not expect. If you’re a fan of the Hulu show Harlots, you’ll love Act 1 of this book as Mary learns the ropes of London whoring from Doll, the carpe diem-rough around the edges-boozing-beautiful in her own way-lady of the night. Mary not only lives with Doll, but looks to the older girl (about 10 years older, I think) as a role model. The intriguing thing about Mary throughout this book is that she doesn’t necessarily have strict ideas about what is good and what is evil, she simply does in order to get something or improve her lot in life. For example, it is seeing Doll with colorful clothing and a glossy red ribbon in her hair that “inspires” Mary to leave her poverty stricken existence behind. Mary sees the toil of her mother–making next to nothing doing little sewing jobs and knows that if she doesn’t do something drastically different, that that empty existence will be her fate. What’s interesting is that Mary chooses this life as a means to elevate her quality of life, and despite its harshness the reader can’t necessarily blame her for it given the miserable alternative. Young though she is, Mary owns her new life as a doxy and even seems to take pride in it.

It’s not until a series of unfortunate events that Mary flees London for her native Monmouth, on the Welsh border. It is here that Mary takes up employment with the Jones family–Mrs. Jones having been a childhood friend of Mary’s mother. Mary presents herself as an innocent charity case to the Jones family, fabricating a story of her being orphaned with no where else to turn.

Although she chafes against small town life at first, Mary comes to find comfort in the “family” she’s ingratiated herself with. Mr. Jones, the one-legged stay maker, Mrs. Jones, the dressmaker, Hetta, their daughter, and Abi the household “maid of all work” aka slave. I found the tenuous friendship between Abi and Mary interesting in that Abi was understandably standoffish at first, while Mary was interested in and quite forward about learning Abi’s origins. Mary very much acts like both a girl of her time and a girl of her age in regards to Abi’s plight. She encourages Abi to run away, yet is unwilling to lend her any money to do so. Although she is not in the book at this point, Doll is ever the influence on Mary–her voice chiming in like a devil on her shoulder, “every girl for herself!” But for all her roughness, Doll very much acted the older sister to Mary.

Mary continually makes choices that will surprise and confound the reader, yet at the same time Donoghue writes her story in such a way that we understand her and root for her. Mary isn’t exactly likable, but she is complex and compelling in her actions. It is she who pushes the plot forward, not the other way around, which makes Slammerkin very much character-driven. The story of Mary Saunders comes from real life events, which I found very interesting. It reminded me of both Alias Grace (the book and the historical figure) and 18th century moral tales a la Pamela (but gone wrong in the end.) Slammerkin makes us examine the thought that maybe not every action has a profound reasoning behind it, and that maybe there is more gray in life than we’d care to admit.

The Highlander’s Tale by Julia Brannan