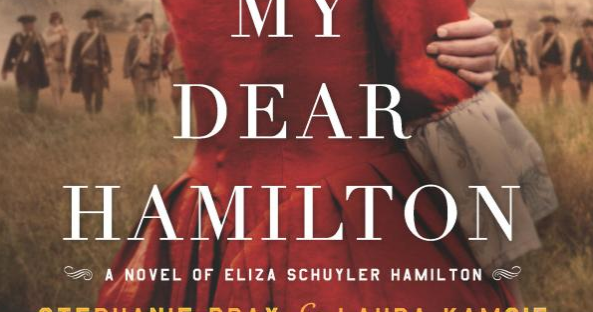 My Dear Hamilton follows the true and extraordinary life of Elizabeth (“Eliza”) Schuyler Hamilton–wife of the famous (or infamous) Alexander Hamilton. We all know Hamilton has gained popularity in recent years with the musical, but Dray and Kamoie’s novel tells this saga of early American from Eliza’s point of view, and in turn, presents an intimate and heartbreaking story.
Alexander Hamilton may have married above his station socially and financially, as Eliza was the daughter of New York plantation owner and Continental General Philip Schuyler, but the Eliza the authors present often feels like she doesn’t measure up to Hamilton’s wit, intelligence, good looks, and charm (on the flip side, Hamilton feels he doesn’t measure up to society given his humble origins.) The idea that Eliza never feels like she is good enough pervades this book, and this is an issue I feel many women can relate to in that we let our insecurities get the best of us. We let our insecurities consume us and prevent us from being happy.
However, Hamilton’s very public affair with Maria Reynolds was not a figment of Eliza’s imagination The shame of the affair followed the Hamiltons’ for years, nearly ending Hamilton’s political career as well as Eliza’s place in society as a woman of status. Although the Hamilton in this book does come clean to Eliza before the affair is made public, the reader will find it very hard to forgive him. Book Eliza, and mostly likely real Eliza, did forgive Hamilton. In our day and age it is easy to say we would have divorced him and moved on with our lives after the public humiliation and betrayal of the affair, but we must understand Eliza was a woman of her time (although she is perhaps more progressive in her views than her contemporaries.) It was uncommon for a woman to divorce her husband in the 18th century, but there are recorded cases of this happening–although few. At this time, the only way a woman could divorce her husband was proof of adultery. The thing here is that Eliza had proof, and yet she stayed with her husband. Did she stay for her children and their future? Did she not want to feel “defeated” by the shame and stay strong in her marriage despite the past? Perhaps she was just a very forgiving person who accepted that, as her sister Angelica says, “All men stray.” And maybe Eliza stayed because she wanted to control the narrative about her life and his life for future generations—to preserve his legacy in the history of creating early America. The latter is very well possible, given that she had an biography written about her husband years after his death. She had to put aside her own personal hurt and pain so that the importance of his legacy was preserved for history. While such a sacrifice can be deemed admirable, I personally find it hard to understand. I am a modern woman, so that may be why. I could not forgive a man who cheated on me–especially after such public humiliation. Quite frankly, I would want to burn down everything he created. Dash his legacy. Furthermore, My Dear Hamilton explores that fact that Hamilton may have had a romantic relationship with fellow aide-de-camp John Laurens, for which Eliza finds out about long after his death and feels as if her entire marriage was based on a lie. More on that subject here. The book uses excerpts from real letters written by Hamilton to support this theory.
My Dear Hamilton leaves the reader feeling betrayed, angry, and utterly heart broken for Eliza. The betrayals she suffered cut deep, and I truly felt her pain at my core.

On another note, I was pleasantly surprised and pleased that the authors included mention and explanation of the Six Nations’ role in the Revolution, as well as the Oneida contribution ad aftermath. On a stylistic note, My Dear Hamilton suffered (in my opinion) the same flaws as America’s First Daughter in that the authors tend to jump quickly in time and gloss over important events through summary, rather than action within the scene. This summarization and glossing over sometimes inhibited my ability to connect with the characters (except Eliza.) I also found the themes being communicated at the end of the book to be repetitive, as if the authors thought the reader wouldn’t understand their meaning.