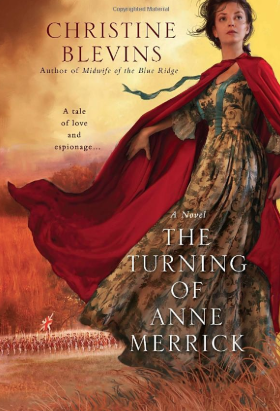 I need to preface this review by saying that about 80% into The Turning of Anne Merrick I found out this book was a sequel! First, this speaks to the fact that technically this novel can stand on its own. Second, Yes–there were moments where major events in the characters’ pasts came up that left me wondering if the first part of the book was completely cut by an editor–now I know why! I’m usually informed about these things, but I actually picked up a copy of this novel in a used book store. That said, for those of you wondering, book 1 is called The Tory Widow, which of course I now intend to read even though I’ve gone about it all backwards! To add, the end of Anne Merrick seemed like it was setting up for a third book in the series, but I can’t find anything online about that just yet (but I wouldn’t be surprised if Christine Blevins has that intention and/or is working on it now.)

And now for the actual review…

The Turning of Anne Merrick was right up my alley with taking place during the American Revolution, involving female spies, New York and Pennsylvania campaigns, and Indigenous characters such as the Oneida. This novel is 100% for fans of Diana Gabaldon’s Outlander series, Sara Donati’s Wilderness series, HBO’s John Adams, and AMC’s Turn: Washington’s Spies. There were flavors and touches from all of these book series/tv shows, as well as Blevins’ own flair. I particularly enjoyed her unique, natural, believable, and period-appropriate dialogue. I’ve definitely read historicals where the characters speak too modern, or dialogue sounds stilted or unnatural–not the case with Blevins.

The novel follows Patriot spies Anne Merrick and her former-indenture, Sally, as they first pose as vendors in the British encampment in New York and later in British-occupied Philadelphia. In Act One of the novel, Anne grows close to a British officer which has echoes to another British Officer Anne was close with but ended disastrously (cue the unread book 1, although Blevins gives summary details enough that I understood the context but perhaps lacked a bit of the full emotional impact.) The story arc with the British officer Anne essentially leads on romantically in order to get information for the Patriot cause has a somewhat unexpected and abrupt conclusion. This choice was not necessarily a bad thing, as I do like to be surprised in novels rather than predicting everything.

Blevins gets all the historical details and figures correct as far as who was where and when. For example–the Oneida scout characters and Quaker spy Lydia Darragh in Philadelphia. I really appreciated their inclusion in this book. Her details of daily life were well-researched and described as well, fully immersing the reader into the 18th Century.

I loved this book and will definitely go back and read The Tory Widow!