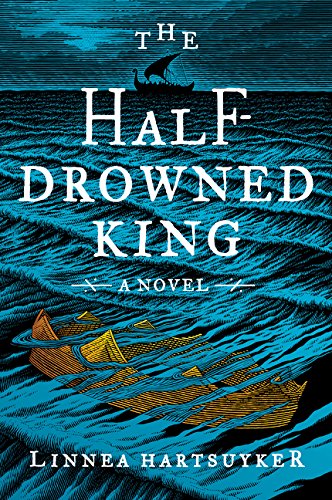 Linnea Hartsuyker’s Golden Wolf trilogy has been on my to-read list for a while for its realistic representation of Scandanavia during the 9th century. Historical Fiction with Vikings–yes, please, but it’s surprisingly hard to find serious stories about Vikings rather than harlequin-esque romance novels about stereotypes (no offense if those are your vice.)

The Half-Drowned King is based on historical events and follows siblings Ragnvald and Svanhild as they navigate their harsh medieval world of political rivalries, vengeance, and strategy. Events are set into motion when Ragnvald’s once friend and ally, Solvi, tries to kill him at the request of Ragnvald’s step-father in a play for the kingdom of Ardal that is rightlfully Ragnvald’s.

While Svanhild finds herself attracted to the charismatic, but cold Solvi, Ragnvald takes asylum with King Hakon and later the prophecized king, Harald–who history knows as the first king who united all of Norway. While Ragnvald seems to be reactionary to the kings, warriors, and power plays around him, Svanhild takes initiative in steering her fate. Her confidence and voice grows as the story unfolds, her wyrd taking on the opposite, yet parallel path of Ragnvald.

If you want to be immersed in a very real medieval world, minus the burly blonde stereotypes, Half-Drowned King is worth the read. I intend to read the others in the series soon!