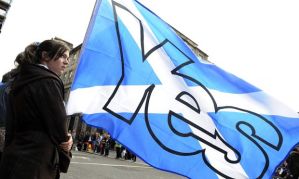 I’m an American citizen. I have an American father and an English mother. That being said, I’ve always had a fascination with the history of the British Isles. Although I have English blood, I will not shy away from the fact that the Scottish have endured a great deal of hardships and injustices under English rule–dating back centuries. All displays of Scottish national identity were outlawed after the Battle of Culloden and the fall of Jacobite rule in Scotland. In modern times, Scots are free to display their national identity in ways that would have been restricted during the 18th and 19th centuries, yet they are still part of the UK.

I guess Americans are known to romanticize the situation, given our own story of independence from England. I won’t contest this, and at the same time, I would like to say that I do not presume to know about the intricacies of politics in the UK. (In the times I’ve been to England and from what I hear from family there, most people in the UK are weary of being part of the EU and disapprove of what the EU does. I won’t presume to have an opinion on that, but there it is. They also don’t seem to be too fond of people from other EU countries coming in and ‘taking jobs’ as Americans would say here about Mexicans–a view which I don’t have, but I digress.) As an American, I don’t have direct stakes in the Indy Ref the same way actual Scottish people do (obviously.) But–and I think a lot of Americans would agree, given our own history of independence, we are inclined to support the vote for Scottish Independence. If for nothing else, historically speaking–Scotland deserves to vote on having independence once and for all.

The opposition to the Yes campaign has spouted similar rhetoric to conservatives in the states, in that that argue any risk would jeopardize more of the same.recently, “no thanks” campaigns have(not surprisingly) been sexist in regards to the vote of women (http://www.buzzfeed.com/jimwaterson/patronising-bt-woman). The bottom line for the opposition is – why take a risk when things are “fine” as they are? I’m sure loyalists during the American Revolution thought the same thing, and moreso that the colonies could not survive without the support of Great Britain. But we have. And perhaps Scotland can too. In a recent debate ( https://www.youtube.com/watch?v=aTF0sj1O8xw ), a Scottish man from the audience contested the “Better Together” sentiment by brilliantly saying, “If we are better together, why are we not better together already?”

Given all the history between Scotland and England, Scotland is more than within its rights to finally hold a vote on the matter of independence. After centuries of fighting against unwanted English rule, now is finally the time to potentially throw off the yoke of England once and for all. Doesn’t any country or group of people with a strong national identity, history, and heritage deserve to choose? Especially after being ruled by an outdated system of colonialism and imperialism (in my opinion, of course. Same goes for Northern Ireland, but that’s a whole other can of worms.)

What country are you from and what do you think of Scotland’s Indy ref?

For more information on the Indy Ref, please visit http://www.yesscotland.net/

5 thoughts on “My 2 cents on the Scottish Indy Ref, for what it’s worth…”

The Evening and the Morning by Ken Follett