I first heard about The Handmaid’s Tale by Margaret Atwood in a high school English class….at least I think it was, maybe it was undergrad? Anyway, the point is I have been meaning to read this book for a long time and for some reason never quite got around to it (I know, I know!) Recently, I found out about the Hulu series being adapted from the book, and in light of the US’s impending presidential term, I thought it was high time I read this Feminist classic. 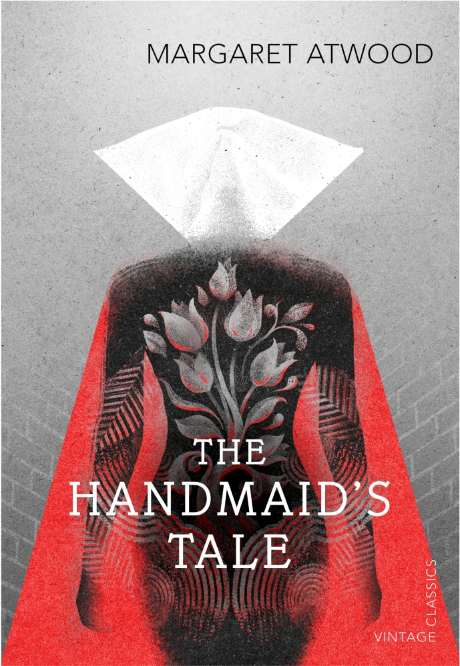 First off, I find it interesting that most dystopian sci-fi novels depict the future as being ruled by a far right-wing, oppressive regime oftentimes a Theocracy and/or Oligarchy. In recent years, the Hunger Games series comes to mind. Perhaps it’s just a suppressed thought in collective consciousness that the cut-throat Capitalism and Oligarchy aspects of America today can only inevitably lead to a wider class and gender divide that will eventually break one way or the other. I understand I may receive some backlash from this post, if people even care enough about what I say, but the fact of the matter is that as an American citizen, I have a right to express my opinion on a president I did not choose.

I don’t want to sensationalize anything, but I also can’t ignore the fact that America is days away from an unprecedented president and time in American history. Women, people of color, immigrants, muslims, and many more have been holding their breaths as the days count down…to what? A gradual revocation of basic rights, of healthcare, of choice, of…? The future is so gray, and we’re now faced with the fear we were forced to accept the morning after the election. So, in light of recent events, it’s very hard for me not to draw comparisons to the world Atwood builds in The Handmaid’s Tale, specifically “The Republic of Gilead” (the former US), a theocratic and totalitarian government.

Have you heard the phrase that goes something along the lines of, put a frog in boiling water and it will freak out, but put in water and slowing bring to a boil and the frog won’t know the difference? That’s how I’ve felt about the out of control snowballing of the election and subsequent 45th presidency. The same could also be said about the rise of Gilead. In this world, at first porno shops are put out of business. Dirty magazine are burned. These things can be seen as oppressive to freedom of speech and expression, yes, but perhaps still relatively low impact enough that most wouldn’t be completely up in arms about it.  That’s how the narrator, Offred, describes it. Even her own 60s/70s era feminist mother seems to agree that women shouldn’t put their bodies on display like that out of self respect (perhaps this is what we call first wave feminism vs second wave feminism.) The US doesn’t go completely off the rails until one day Offred (this is the name she is given later, by the way) goes to the store and is told her bank account has been declined. She then goes to work and finds that she, and all the other women, have been fired. It isn’t until later that day that she learns all women have lost their jobs and all women have had they bank accounts frozen and diverted to their husbands or closest male relative.

It’s hard to imagine such a drastic and sudden change happening here, when there are layers and layers of bureaucracy. Our government’s checks and balances of power are in place to prevent any one person or group from imposing such sudden, forceful changes (but yet, here we are in what often seems like a parallel universe.)  Since we experience Gilead from Offred’s ground view, we never really find who is at the top of the new government, only that there is a new army–a group of radicals.  Nevertheless, Offred and many other healthy women of child-bearing age are shipped off to a training facility to become Handmaidens, or women who are merely cherished vessels of breeding for a higher class. Offred questions her training and her life as a Handmaid as her new “normal”, her presumed complacency to go along with this restrictive new way of life–but what other choice does she have? In this society, the actions of both men and women are highly regulated. It is one way or death.

Being a Margaret Atwood piece, I of course read this book through a feminist lens (which, to be honest, I tend to do anyway.) I haven’t done any research on interpretations or opinions on The Handmaid’s Tale before writing this review, because I didn’t want anything else influencing my initial takeaway, and it is this: I believe Atwood highlights the importance of women supporting each other in all things. There’s been a lot of talk lately over the fact that women don’t always support each other and are quick to tear each other down. We face enough adversity that we should be holding each other up. The “Aunts” in Gilead train and watch over the Handmaids, often treating them with disdain. It reminded me of how the Nazis would appoint Jewish police in the ghettos…how far will someone go to protect themselves or their family, even if it means working against your own gender or religious group? If the Aunts had revolted and helped the Handmaids escape Gilead, the fledgling Totalitarian government wouldn’t have lasted very long. There is power is numbers. Even the wife of Offred’s Commander treats Offred with resentment and cruelty, yet tolerates her presence only for the hope of a child. Offred, by the way, comes from a naming system within Gilead to distinguish Handmaids by who they serve. So, quite literally, of – Fred. And if a Handmaid gets transferred to a new Commander, she takes on a new name to mark herself by a new man. Sound familiar…? Okay, that’s another can of worms…

Another interpretation of Atwood’s work is that women should not be put on a pedestal as some precious commodity–a crystal vessel, if you will, treated with care and handled delicately as it fulfills its purpose.  I think men often times confuse this mindset with respect. If one truly views women as equal to men, then women would not be treated as if we cannot hold our own bags or doors, for example. If you’re a man who thinks you have to do that and you believe you are for equal rights, then you should also be holding the doors and bags of other men. In Gilead, Offred notes how women are now so protected that men no longer cat call and she never has to be afraid to walk alone like before (even though the Handmaids must always walk in pairs.) Okay, so that wouldn’t be so bad–and she recognizes that, but at what cost? Well, the actions and mindsets of men were not fundamentally changed so that they’d respect all women–no, they were forced to by the new laws put in place. No man is going to whistle at a women if it means he’ll be hanging from the city wall the next day. In terms of today in our own world, there are still unspoken rules for all women: don’t walk alone at night–especially in an unlit area, don’t leave a drink unattended in public, etc. For me, I purposely don’t wear certain clothing because I don’t want men to cat call me–not my style anyway, but even if it was, I know I shouldn’t have this reaction because 1. We shouldn’t have to change how they look based on men’s opinions or possible malicious actions because they should know how to act like human beings, and 2. Over the years, I’ve come to find that men will say that stuff no matter how I look or what I wear (fully clothed PJs, just rolled out of bed look while walking my dog…yea, it’s happened.) There needs to be a systemic change in the way men view women, and I know that’s not just going to happen overnight–and it only would if something happened akin to what occurs in Gilead, but I wouldn’t want it that way and I’m sure many would agree. Who wants someone to be forced to an opinion and resent it when that same person can come to an opinion on his own and fully understand the full scope and repercussions? The conversation on these issues has opened up in recent years, and I feel younger generations are understanding and embracing true equality and respect for all, so I hope our next president doesn’t negate all that in favor of the new (rude, racist, sexist…) normal. I hope it’s not too late for continued progress.

This review has gone off into an incoherent rant, but it’s hard not to think about our own society when I read something like this. I don’t want to be scared of the US’s future under our new president, but who can blame me and thousands of others for being weary when it is our rights and/or healthcare and/or choice at stake? It’s hard not to view Atwood’s work as a warning of extremism, theocracy, sexism, and the abuse of power. The end section of the book brings out a little surprise which allows for a broader scope of Gilead, but I won’t be too specific if you haven’t read it yet and don’t want to be spoiled (but then again, I am very late to the party!) The Handmaid’s Tale was written in 1985, but it just as relevant today–perhaps even moreso. Eerily so. In turn, I highly recommend any woman or man read it. What’s more, Atwood’s prose is beautifully constructed and oddly specific–needless to say, she is a very talented wordsmith.