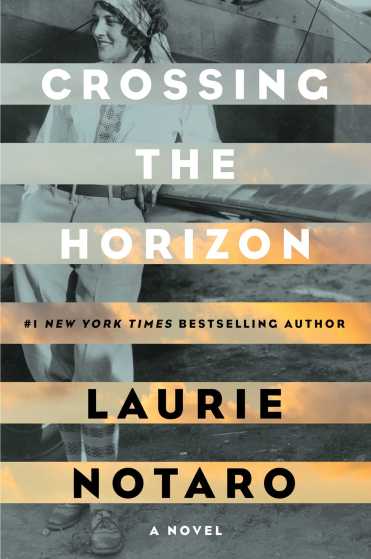 Crossing the Horizon: A Novel by Laurie Notaro is the true story of trailblazing women: Elsie Mackay, Ruth Elder, and Mabel Boll. After Charles Lindbergh’s historic trans-Atlantic flight in 1927, the few and pioneering aviatrixes in the world sought to claim the title of “First woman to fly across the Atlantic.” We all know Amelia Earhart’s story, but before this novel I (shamefully) had never even heard of Elsie, Ruth, or Mabel. What I learned from Notaro’s novel, however, was inspiring and eye opening. Not only was it uncommon for women to fly during the 20s (and still is??), but it was also uncommon for a woman to do much for herself outside of the home. Elsie and Ruth actually learned to fly and obtained their pilots licenses, while Mabel used her wealth to hire pilots (an unsuccessful string, as you’ll find if you read the book.) Notaro explains in the author’s note that she interviewed family members, as well as took dialogue from actual newspaper clippings and interviews. One assumes, then, that Notaro’s portrayal of these women is accurate. Elsie: the classically beautiful, wealthy heiress with a heart of gold and “the courage of a lion.” Ruth: Young, spunky, and cute as a button Southern gal who just wanted to make a life for herself, by herself. And Mabel: Spoiled, sassy, selfish, and utterly determined to gain the title, “Queen of the Air” at all costs. While Elsie and Ruth are likable to the reader, Mabel Boll leaves much to be desired. And yet, Notaro crafts a narrative that makes the reader root for them all. While the press and even Mabel herself often pit the women against each other in a battle for the historic title, Notaro points to the importance of women supporting each other and holding each other up for further advancement of the sex. For example, Elsie’s best friend Sophie keeps a grave secret and even has accounts for Elsie in her name so that Elsie’s plan is not exposed to her family or the press. Bluebell, Elsie’s younger cousin, looks up to the actress-turned-interior designer-turned aviatrix for strength and inspiration.

Crossing the Horizon was a fascinating and entertaining history lesson in the women who carved the way before Amelia Earhart, of the women who went down in the Atlantic and were never seen again. Or the ones who never got to fulfill their dream. What I found perhaps the most amazing about these women was that–at the risk of sounding cliche–no matter what, they kept going. Elsie had a near-death accident with a plane during her flying lessons, but that never put her off. Ruth was not supported by her husband in her dream to achieve the title, nor was she taken seriously by the press. And, Ruth Elder was only 23 to boot! I can’t imagine flying across the north Atlantic in death-defying storms at age 23!

I could certainly see this novel as a mini-series, as I believe it is important to tell the stories of women who have been pushed aside in favor of more famous men.

My only nit-pit with this book was that some sections, most notably the end, seemed rushed and thus filled with quick summaries of events rather than fully fleshed out scenes.