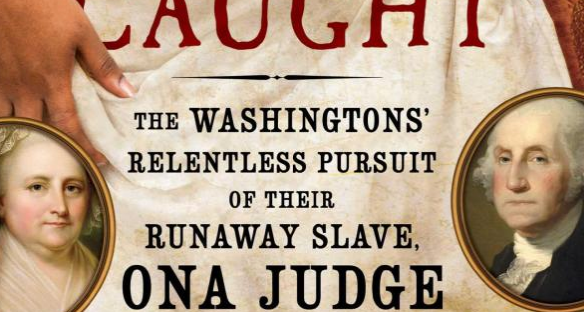 I haven’t gotten into the habit of reviewing non-fiction books, as I often find them hard to review in the same way I review fiction. Nevertheless, I will try to make more of an effort to do so. Never Caught seems like an exception to me, though. Dunbar has written what I would classify as Creative Non-Fiction in that the story flows as a clear narrative and is engaging to read, even if one is not well versed on the historical context. Having read quite a bit on this period (as I’m sure you’ve guessed from my other reading choices,) I did have the historical context, but had not before heard this story. I believe I first discovered this book as a recommended read/Customer’s Also Bought… on Amazon, and the title immediately intrigued me. I am interested in the dichotomy of the Founding Fathers who were slave owners, and the inherit complexities therein. What Dunbar makes clear in this book, as I have found through other writers and historians, is that Washington sometimes chafed at the institution of slavery (especially in the context of a new nation founded on freedom and how his slave owning status would appear to Northern Americans,) but he was not willing to part with that way of life because of the economic fall out (his Will is another story.) Martha Washington, on the other hand, came into her second marriage from a much more economically privileged position and seemed to have ambivalence about slavery. She was comfortable in her life as a wealthy Southern woman and eventual First-Lady of the United States, and she had Ona Judge largely to thank for that. Ona was Martha’s body slave, waiting on her hand and foot–at all hours. As a house slave of a wealthy family, Ona was treated “better” than field slaves, but she was still a slave and her life was not her own.

Dunbar sheds light on the measures the Washingtons took to circumvent the laws in Pennsylvania while they and their slaves lived in Philadelphia during the first presidency. PA law stated that slaves over a certain age would be granted freedom after six months (that’s a very nutshell explanation, I know) of residency. The Washingtons and their white staff were careful to keep this law from their slaves, and so they often rotated them back to Mount Vernon (where the laws were more lax regarding slavery) after six months of PA residence. Ona was a young woman when Martha decided to “gift” her to her granddaughter as a wedding present. Any guise of familial closeness Ona once had with Martha was gone. Ona had learned about and somewhat interacted with the community of free blacks in Philadelphia, and was perhaps inspired by and aided by them when she finally decided to escape.

Ona Judge is an interesting and extraordinary figure in history given what she was willing to sacrifice for her freedom. She stared white slave catchers in the face and told them she refused to go back to Mount Vernon. She carved out a new life for herself, and was truly never caught despite the haughty entitlement and attempts at recapturing by the Washingtons.

Dunbar writes for a mass audience here, but rather than dumbing the subject down, she has created an engaging narrative that almost reads like a novel.