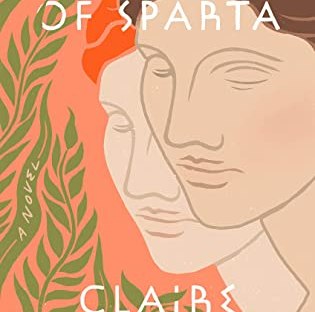 Most of us know Homer’s famous Iliad and the stories/myths therein. Helen of Troy is perhaps one of the most famous characters in this epic poem–“the face that launched 1000 ships.” Despite Helen being a main character, Homer’s epic largely focuses on the perspective of the male heroes of the story–like Hektor, Menelaus, and Agamemnon. Claire Heywood’s Daughters of Sparta tells the famous myth from the points of view of Helen and her older sister Klytemnestra (wife of Agamemnon.)

Rather than romanticizing this “age of heroes,” Heywood grounds the story through the lens of women who face harsh realities of the age: to be married off to a man likely twice your age when you yourself are only 11 – 13, you only exist as a wife to create an heir, you must be submissive to your husband’s wants and needs at all times, no matter how irrational or hurtful.

Daughters of Sparta digs deeper into the complexities of the sisters and how each of their romanticized versions of their futures turn out to be quite the opposite. Agamemnon is domineering and cold to the kind and gentle Klytemnestra. Helen, as fiery as her hair, feels ignored by her husband Menelaus (brother of Agamemnon.) While Helen does have one child by him, the brutal experience traumatizes her into using herbal remedies, as well as pushing her husband away, to not have another child which may kill her. In this belief, the chasm between Helen and Menelaus grows. When Prince Paris of Troy arrives on a diplomatic visit while Menelaus is away, he befriends Helen and the two seemingly fall in love.

However, any thought of happily ever after is dashed when the story advances a few years to find the relationship between Helen and Paris virtually non-existent. Paris simply wanted another “beautiful thing” to add to his collection of gold and prized possessions. Helen befriends Paris’s younger sister, the only person who shows her any kindness in foreign Troy.

Meanwhile, Klytemnestra suffers a terrible blow and betrayal, allowing herself to embrace her anger and true emotions to make a vow to kill Agamemnon if or when he returns from the war in Troy.

Ultimately, Daughters of Sparta focuses on the harsh realities of women meant for nothing more than to breed; the physical danger of having a child, the emotional and physical abuse from a husband, the “proper” way to do things to seem modest instead of a “whore.” The story of Helen and Klytemnestra are the stories of women across ages. Women who must navigate through the dangerous world of men and do what they must to survive. This is not the romanticized mythological story, but the harsh truth often reflected in our own lives.