Fought October 4, 1777, the Battle of Germantown was one of Washington’s final attempts to win back Philadelphia from the British.
By the time the Battle of Germantown was fought, Washington’s army suffered low morale due to the back to back losses at Brandywine and Paoli (which actually wasn’t the full-out massacre the papers of the time made it out to be–but it was still an ambush).
Germantown was, like many battles of the Revolution, fought in the veil of fog…a troublesome, eerie thing that often caused confusion. It is no wonder that the alleged drunkard Brigadier General Adam Stephen and his men got turned around and started firing on General Anthony Wayne’s troops (not a man you’d want to piss off, given his infamous temper…) 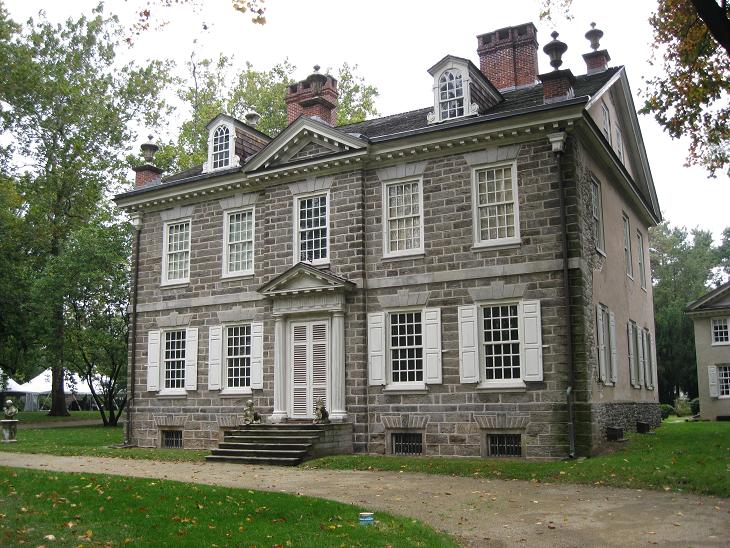 The bulk of the battle took place around Cliveden, aka the Benjamin Chew House. No one was home at the time, the house having been abandoned by Chew (an alleged Tory sympathizer). The British and their guns took up station in and around Cliveden atop the hill, relentlessly firing on the advancing Continental troops below. The Continentals attempted several pushes toward the house, but each time their guns fell short.
The Continentals fell back–frayed, disoriented, and disheartened–and made their way back to their encampment at Skippack–the failed attempt to win back Philadelphia heavy on their shoulders.

Here is an out-of-context excerpt from Light & Stone featuring the Battle of Germantown:

The chance to win Philadelphia back now rested upon Washington’s plan to attack the city from the northwest, by way of Germantown. They moved under the cover of darkness, splitting up to traverse several different routes to town. Fog covered their way and some of the men jested that Washington must control the weather. Haven was inclined to agree, for nearly all the battles fought had been veiled.
Germantown Road disappeared some twenty yards ahead into a wall of gray, the winding column seeming to vanish altogether into an abyss marked only by the muted spark of cannon fire. She shivered, eyes darting to Hawley beside her. He’d stayed close since Paoli, perhaps hoping to repay a debt that didn’t need paid.
…
Ahead, the cannon fire and musketry intensified. She shuddered, but raised her chin. She would never grow accustomed to battle. Doing so would only mean she had lost something of herself that she was not willing to give up.
Bursts of orange peppered the swirling murkiness like violent specters—gone in a flash, their outlines floating before fading. The edge of a tall structure came into view; a great stone house from which the sparks fired from.
“That’s Cliveden house,” Hawley whispered, gripping his musket.
“What?”
“My auntie used to work there, for that Chew fella. A Tory, I think.”
Deafening cannon fire shook the ground, their grips tightening on their muskets until their knuckles turned white.
“You’re aunt’s not still here, is she?”
Hawley shook his head. “Dead near nine years now, God rest her soul.”
General Wayne’s ordered boomed across the line; a call for their arms to be loaded behind the cover of a low stone wall.
Shots came steadily from within Cliveden. Several Continentals had tried to rush up toward it only to be struck down. The rest of the line waited behind the wall as the officers ordered artillery on the house.
A bit of stone jumped between their heads. Haven and Hawley jerked back.
“Did that come from—” Hawley pointed the direction they’d come, the main road now swallowed entirely by fog.
With a bright orange flash, the soldier on the other side of Hawley slumped forward.
“We’ve been flanked,” Haven breathed, blood running cold.
Wayne rode some distance away and commanded the line to advance. But the orders were quickly buried by the volley of shots from behind. Men dove over the wall, while others took their chances with the British firing from the house. Crouching, Haven pushed Hawley toward the end of the wall.
Their foes swept out of the veil, revealing men in gray and blue coats.

2 thoughts on “238th Anniversary of the Battle of Germantown”